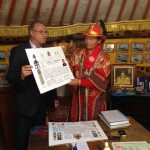 ​In this fourth day of September in the year 2014, the​ actual​ Prince of Mongolia, on behalf of the World Foundation GENGIS KAHN ​from ​UNESCO, officially handed the certificates and diplomas certifying that HRH Tristan BATHORY E​CSED SOMYLO​ (Tristan ​Jacques Jean Daniel GILLOT) is​: King of Mongolia, King of the Indus Valley, Prince of Transylvania, King of Poland, King of Hungary, Grand Duke Lithuania, the last descendant of Batu Khan and sole heir of the Golden Horde. Also, there are plans in the near future, the realization of the coronation ceremony at the Royal Houses of the five continents.

The suffering and the contempt never reach the quality of the soul, but the price will always be the recognition.

What is the World Foundation GENGIS KHAN?

The Prince of Mongolia, Khan-Oidovyn Purev Davaanyam, is the President and Founder of the World Foundation GENGIS KHAN to recover the history of the dynasty and the culture of GENGIS KHAN encompassing all its descendants in Asia and Europe. Prince Davaanyam, is the descendant of the 29th generation of Gengis Khan and his “Golden Horde”. He was designated and elected by the members of his family to reveal a hidden part of wisdom, philosophy and legacy of the descent of the kings of Mongolia.

Looking for descendants of Batu Khan, grand-son of Gengis Khan, whose Golden Horde invaded Western Asia at the gates of Europe, he found his Majesty Tristan BATHORY ECSED SOMLYO , the last descendant of Batu Khan and sole heir of the properties and fields of the Golden Horde in Eastern Europe.

Svastika cross for the King of the Valley of the Indus

Prince Purev Davaanyam has also confirmed the name: KING OF THE VALLEY OF THE INDUS for HRH Tristan BATHORY ECSED SOMLYO by the direct family link by comparing the DNA collected in the tomb of King BATHOR and the DNA of the present King of Mongolia in collaboration with the University of Karachi in Pakistan. Prince Purev Davaanyam has also confirmed that SAR Tristan BATHORY ECSED SOMLYO is the main descendant of the King BATHOR ancestor of GENGIS KHAN. According to history, the culture of the Indus Valley up to Gandhara, which in turn preceded the birth of the Vedic culture where the svastika is one of the main religious symbols until now even religion Hindu and Tibetan Buddhism, which has greatly expanded throughout Asia and especially in Mongolia.

So, as not to create misunderstandings, the Svastika symbol is common of Hindu-Buddhist whose meaning is best explained on Wikipedia: 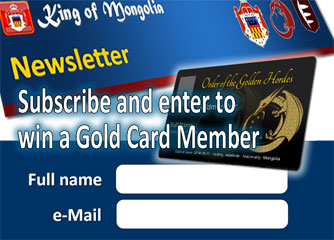 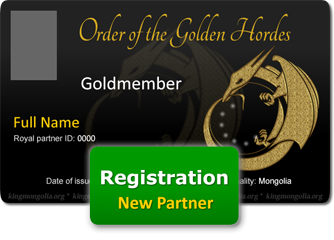